Posadas is known as a hospitality leader throughout the hotel industry. Its history has been written with passion, dedication and hard work, and rewarded with nearly every significant recognition in the industry. However, the brand has had limited awareness within the United States, with this U.S. visitor audience comprising a significant portion of overall property visitation. Growing the resort collection’s brand profile among this consumer group is a critical step in driving future business.

With this challenge firmly in focus, R&R’s team landed on the brand position of “La Colección.” With luxury resorts situated in some of Mexico’s prime coastal destinations, La Colección, was created around the consumer insight that many of us daydream of our next vacation. Making sure the brand stands out from its competition, we identified an opportunity to inspire the dreams of vacationers through storytelling. Utilizing our brand platform, R&R crafted a compelling story inspired by the brand’s unique attributes, grounded in consumer and brand truths, and designed to create an emotional connection with the consumer. We launched Grupos’ new brand by developing a new website, digital content strategy, and a fully integrated digital and social campaign.

In a city constantly reinventing itself, the stakes were never higher for community leaders, an unlikely mix of hotel executives, the Las Vegas Convention and Visitors Authority, and thousands of local football fans. The future of two major construction projects was on the line, which would forever change Las Vegas’ skyline for the better. But this once-in-a-lifetime opportunity to move Southern Nevada to the next level faced heavy opposition. So they turned to R&R Partners for help.

Branded the Win-Win Nevada Coalition by R&R’s team, we would head up one of the toughest challenges in recent Nevada history in convincing 63 state legislators of the need to support a change in legislation that would benefit our city: passing new room taxes to help fund the renovation and expansion of the Las Vegas Convention Center to keep our convention business competitive, and to help fund a new professional 65,000-seat, domed sport stadium.

The first challenge for the coalition was to secure support from two-thirds of 63 legislators to enable the governor to call a special session. The next hurdle would be securing passage of two intertwined bills that would change how room tax revenues would fund the Las Vegas Convention Center expansion, and help in the construction of a new NFL-ready stadium to lure a professional football team to relocate to Las Vegas. This was no either/or proposition – we all got what we wanted, or we all went down in flames.

We started with only 22 votes out of the 63 legislators. We needed 42.

So how did we do it?

With the collaboration of every single discipline at R&R, we launched a targeted campaign that flipped the negative sentiment on its head. Our message was powerful: a vote for the stadium was a vote for 40,000 construction jobs, an injection of $1.5 billion into the local economy, and an additional $32 million in education dollars annually. And a vote for expanding and remodeling our convention center was a vote for keeping our lead as the No. 1 convention destination in the business.

In three very short weeks, we created a tagline, a logo to match, a website, out-of-home media, collateral and a social media campaign. We arranged for speeches, testimonials, a video … the list goes on. And it turned the tide. We created enough momentum for the governor to call a special session. We secured the votes needed, and we won. We even capped it off with a press conference to detail the negotiated workforce benefits for minority communities in Las Vegas, and a bill-signing ceremony with the governor. Our social, online and earned media numbers were off the charts, too – $69 million in PR value and 4.7 million online impressions, to name just a couple.

The bottom line: Our campaign wasn’t just about impressive metrics on a page. It was about winning triumphantly or losing completely. And with one of the most integrated, wide-ranging, kick-ass teams ever assembled at R&R, we declared victory. 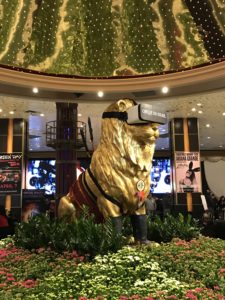 Journalists of the Digi-Vegas FAM also experienced the KÀ VR experience in the lobby of MGM Grand Hotel & Casino.

To promote Las Vegas as a leading technology and travel destination, R&R Partners’ public relations team recently arranged, scheduled and hosted the Digi-Vegas FAM trip on the cusp of the Consumer Electronic Show’s 50th anniversary this past January.

Five journalists from the United States, United Kingdom and Mexico were recruited to attend this exclusive Vegas “familiarization” press trip. Representing leading travel and business publications,
journalists went behind the scenes of Las Vegas’ top attractions and entertainment venues, and experienced only-in-Vegas moments in both real time and virtual reality, including experiences in Vegas VR. While much of the coverage is slated to run in upcoming publications, the first article to result from this press visit can be found on Forbes.

Recently, R&R Partners created a TV spot for WaytoQuit.org that tested among the top-10 most effective anti-smoking messages nationally.  The emotionally jarring spot was extremely effective at inspiring quit attempts, especially among parents with kids. Based on the success of that campaign, we’re now taking the message one step further.

Many smokers in Utah are young males without children who don’t watch much TV. R&R needed a message that would encourage quit attempts among this audience, too. Research showed that while many young males don’t have families, they do have pets that they consider family, and that secondhand smoke harms pets as much as it does babies and toddlers.

So, the employees at R&R Salt Lake City brought in their various dogs, cats, parrots and rabbits and filmed them right there in the office. Visual effects were then added to show the animals puffing on cigarettes, pipes and cigars. The message was simple, “If you smoke, your pets smoke.” The videos ran on social media and pre-roll.

The results have been impressive. During January/February, the first months that the smoking animal videos ran, visits to waytoquit.org (the website featuring tobacco cessation information) tripled from the same time last year, while time spent on the site doubled. Quit service enrollments, both telephone and online, also increased 30 percent.

The videos will be featured at a national tobacco prevention conference.

The Stanley Cup is arguably the most famous trophy in all of professional sports. And to celebrate its 125th anniversary, the National Hockey League selected R&R Partners to help promote the occasion.

R&R created and produced a month-long campaign that included two broadcast spots, a 360-VR activation at an NHL game, and a content film to be shared out with the NHL’s 4 million-plus followers. The most engaging aspect of the campaign was our activation effort. Our team concepted and produced a surprise and delight moment at the PPG Paints Arena in Pittsburgh for the Penguin’s February 18 game.

Fans were invited to line up before and after the game to step inside our 20-foot shipping container that housed our VR experience. Each guest sat down around a small, unassuming black table equipped with VR headsets and a tiny replica of the Stanley Cup. Each guest was set up with the headset by our brand ambassadors and transported to a VR world of historic Cup wins and clips of the Cup being hoisted by their favorite players. A final scene involved Phil Pritchard – the official keeper of the Cup– and an opportunity to virtually reach out and grab the Cup. But what the guests didn’t know was, while they were inside this VR world, Phil and the Cup were actually in the room.

The iconic Stanley Cup is placed in front of an unsuspecting fan while watching the 125th Stanley Cup VR video.

Once fans were situated, Phil quietly came out from behind a black curtain and replaced the tiny replica on the table in front of them with the actual Stanley Cup! The reactions, once headsets were removed, ran the spectrum. There were lots of tears, screams, and complete and utter shock that left some completely speechless. It’s truly amazing to see the deep connection the Cup holds with each person.

Working with the NHL was truly an honor for the agency and we created work that lives up to its legacy. View the TV campaign and a video of the fan experience below:

“If This Cup Could Talk”