After attending ad:tech and seeing a series on innovation, I was inspired to think outside the proverbial box.  Many of the examples that were shown were interesting, but the ones I found most impactful were the ones that paired medias that you wouldn’t traditionally think would work together.  The following are just a few examples of how advertisers who have produced innovative campaigns and tactics that were attention grabbing and buzz worthy.

To promote the July 15 premiere of reality series “The Franchise: A Season With the San Francisco Giants,” Showtime partnered with the Major League Baseball to create a billboard display that dispensed baseballs, some signed by Giants, when people checked in on Foursquare at the MLB Fan Cave storefront in Manhattan. For those who automatically shared their Foursquare posts to either Twitter or Facebook or both — roughly a quarter of people on Foursquare — a “Franchise” ad and tune-in message was automatically sent to those social-media accounts.  I liked this execution for its simplicity – traditional OOH paired with Foursquare’s check-in.

In Hong Kong, Coke was trying to target teens, which they learned were spending more time on their phones than watching TV.  They created an app that allowed teens to play a game called “Chok” when a specific Coke commercial aired.  Just 15 hours after the campaign launched, the “Chok” app had become the number 1 free app at the Apple store. It remained number 1 for another week and by the end of the third week, there were more than 300,000 unique downloads.

Converse used a fairly common paid media, SEM, but in a very unique way allowing them to engage with their teenage audience in a manner that was personal to them.

As we all know the decline of readership in newspaper has been discussed for years, especially since the economy tanked and the mobile space has grown. “According to an eMarketer study of U.S. adult media habits, the average time spent reading newspaper has decreased by 12 minutes from 2008 to 2011.” 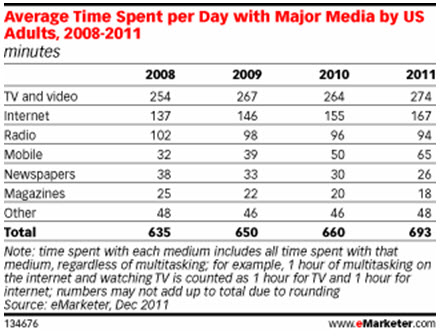 “The University of Southern California’s Annenberg Center for the Digital Future predicts within five years, only four major daily papers will continue in print form.” The four survivors forecasted to remain are The New York Times, Wall Street Journal, The Washington Post and USA Today. The New York Times and Wall Street Journal require a paid subscription to access their online content; while USA Today and Washington Post still allow readers to browse their site for news updates with no subscription. USA Today is projected to have paid subscriptions some time in 2012.

“The Washington Post has weathered its financial storms better than most dailies: Its Kaplan educational subsidiary has remained largely profitable, helping to stabilize the paper’s finances. Coupled with major cutbacks — the Post has closed all but two of its regional suburban bureaus and almost halved its reporter corps — this has sufficed to stem the loss of revenue.”

As consumers branch away from newspaper and use television, mobile sites or the internet to get the latest news story instead of waiting until tomorrow morning, the national/local newspapers are suffering. The cost of paper is increasing and the subscriptions are decreasing. Television is still the main outlet for consumers to get the most up to date news.

“A recent Rasmussen poll found that a clear majority of Americans – 59% — plan on getting most of their political information from their television sets this year. That number represents the combined total for cable and broadcast sources. The breakdown of the 59% is 37% cable, 22% broadcast. The internet is second with 21%. Newspaper and radio trailed, with neither able to break into double digits, pulling responses of 9% and 7% respectively. 18% now get political updates over a phone or other mobile device, with 18-29-year-olds twice more likely to do so than the 65+ crowd.”