If you talk to any good creative they will tell you politics and good marketing don’t go together. They will tell you that there are too many formulas for political advertising … and that it is tough to be really creative. I have seen both sides. Some really creative political work; lots of formula work; and some really bad work (especially in the last election). And in my career, I have done all three. In the new movie NO, a desperate situation leads to creative marketing with almost a Pepsi-like political campaign. When Chile is faced with the daunting task of ousting its longtime leader, the powers that be decide they have to take risks. So, they do. And, surprise, it works. By taking risks, I mean treating the candidate or party like an agency would treat an actual brand. It doesn’t happen very often. Political marketing people think they are building a brand but, for the most part, they are just using formulas, like putting him or her with the family, showing them with the right peeps and reacting to what the other candidate or party does. And, of course, counting the lies. That is pretty much a proven route to at least a reasonably close campaign.

Obama did it right in his first election by creating the CHANGE brand. His platform was as intriguing as he was. The second time around, his brand was basically, I AM NOT ROMNEY. Which worked also because he was on the right side and he had very sophisticated polling methods. Sometimes that’s all you need. Well, that and a talking horse. You really can’t go wrong with a wealthy talking horse ad. 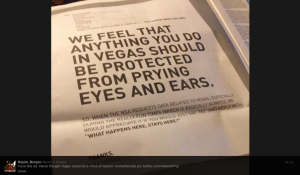 So what about when brands pick sides? We just did a piece for our client (the Las Vegas Convention and Visitors Authority) that played off of the NSA controversy. The ad is featured here and did pretty well, garnering more than 10 times its cost in earned media. That is media earned from the publicity – not from paying to have something placed in media. Afterward, I listened to an interview with Stuart Elliott from The New York Times where he intimated that as long as it’s a one-time thing and Las Vegas doesn’t pick sides … it’s cute and fun. I may be putting words in his mouth, but he seemed to be saying that brands like Vegas can have fun with current events but not become an active part in them – at least a brand like Vegas.

At R&R, we pride ourselves on Building and Protecting the brands we work for. And there are no other agencies in the country that have a marketing arm and a political arm that are both successful in what they do to the level we are. But even around here, it’s an interesting argument. Can a brand pick a side on a public issue and ride with it … or is politics too serious and a brand like Vegas too fun? Will some of that serious issue taint the brand or will the issue turn and the brand suffer? Or are big issues just to negative and a brand like Vegas too positive? It usually makes for a really long meeting.

It’s a tough one. The truth of the Vegas brand is Adult Freedom. That is what led to What happens here, stays here® and most of what happens with the brand. That puts Vegas clearly on the side of privacy and all the freedoms that allows. Vegas is a place where you can do and be what you can’t at home – and no one will judge you. Seems pretty clear that Vegas is on the side against the NSA, whether it’s done in a fun way or a more serious way. Of course, the NSA has its own WHHSH aspects. I recently read a piece where a man tries to get a record of the information the NSA has on him through the FREEDOM OF INFORMATION ACT. The NSA responded by telling him that they can’t send him that information because they can’t reveal that they have it. That would be a risk to national security. Vegas is kind of the same way … if you tell on one person, everyone is in danger.

Comedians don’t stop until it’s not funny anymore. I use The Daily Show and The Colbert Report as a measure of what still has play and what doesn’t. But you could really use any late night talk show. Or you could just do a Google search, watch the chatter on Twitter. There are a million ways to see if something is still a story. Later this month, the head of the NSA is speaking here … so really the story is just building and building. So there is still play in the NSA.

One of the tweets I continue to see on Twitter is “What happens in Vegas, stays in an NSA database.” This is being passed around continually. It might actually be gaining momentum as a tweet meme. And some would argue a tweet like that is dangerous to the LVCVA brand. Whether you like it or not, social media erodes What happens here, stays here. That’s why we came up with the #knowthecode campaign in the first place. With so much being shared online, the whole WHHSH claim seems suspect. Las Vegas has to protect that … R&R has to protect that. But is there a cost to going too far in the real world versus the marketing world? Or is there any difference anymore? Has the social media world brought the two so close together that there are fewer lines between them? And is there a danger of a brand looking like it is taking itself too seriously

This isn’t really new. We have done this sort of thing before. When Biden said something he shouldn’t have, we commented. When Obama said something detrimental about Vegas, we shot back. We defended Prince Harry. But we didn’t go too far. We stayed in the brand’s voice and made it a short blast and not a continued effort. And we aren’t the only people doing it. A lingerie brand played off the NSA thing with a message to Snowden … again, pretty much a one-time shot. And a number of brands are defending the LGBT issues in this country … Oreo has done a fantastic job of this.

And in Brazil, protesters are picking and choosing brands to use against the government by their slogans. “Come to the street,” a Fiat slogan used to celebrate the Confederations Cup soccer championship, and “The Giant woke up,” a slogan for Johnnie Walker in Brazil, have both been seen on signs and on Twitter.

What if we do go too far? I guess there is always the danger of going so far that we are all arrested and put in a very dark cell where no one will ever find us. It would be hard to put the whole city of Vegas in such a cell, but certain R&R folk could disappear and no one would be the wiser. I am always looking over my shoulder. Then there is the danger of Vegas seeming un-American. What is more American than total self-gratification for a weekend? Nothing. I know this from personal experience as an American who does a lot of selfing. And there is the risk of losing U.S. government conventions and meetings that are held here. Nah … politicians enjoy selfing way too much.

I would love your opinion on this. Are brands separate from the issues of the people? Is there a responsibility to become part of the conversation? Is it dangerous for a brand to speak too loudly on an issue even if it fits the truth of that brand? Let me know … I am listening.

This message was brought to you by THE COMMITTEE FOR A FREE LAS VEGAS.