Print is one of the oldest forms of marketing, but it still has many useful aspects that keep it a valuable source of advertisement.

Print is often overshadowed by high-tech forms of media, such as broadcast and the Internet.  These outlets are constrained by the availability of computers and televisions, which in some parts of the world may be limited. In areas where broadcasting or digital media is unavailable, print becomes valuable in marketing.

Print also allows marketers to relay more information than broadcasting. For example, Gatorade utilizes plans to uzilize print in the 2nd Qtr to market its G Series line which features pre-workout and recovery drinks.  With more products in its G Series line, a television spot  limits Gatorade from explaining each product in the line and its importance to athletes.  Gatorade plans to use print ads for the 2nd Qtr which allows for more space to convey all the information they want to provide. Gatorade plans to reach more athletes by distributing the ads in locker rooms, at summer camps, and in sideline programs.

Print ads are good for brands who want to display more information to a targeted audience. For example, a prescription ad on television must fill its short allotted spot with legal disclaimers and only brief highlights of its product.  However, with print, the company can list much more information about a drug as well as distribute it to specific print outlets so it reaches its targeted population. For example, a heart medication could be placed in Men’s Health and educate its potential users. 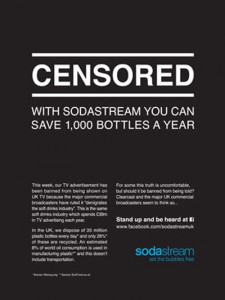 Print is also a valuable medium for controversial ads that might oppose a bigger market. While an ad may be pulled instantly from broadcast, a print ad is much harder to regulate. For instance, UK’s SodaStream television spot was banned for “denigrating the soft drinks industry.” To get their message out, they resorted to print ads in major UK newspapers, which allowed them to convey the message that television wouldn’t allow.  In the UK advertising regulatory system, print ads take much longer to ban since complaints must be made to the Advertising Standards and the entire decision process goes through after the campaign is complete.  SodaStream’s print ad campaign was effective against the soft-drink industry and even pointed out Clearcast’s role in favoring bigger marketers.  Print’s slower regulation and censorship process allows for print media to be more effective for controversial topics, allowing for campaigns to make a stronger impact.

Print media will continue to have a prominent role in advertising globally as it overcomes the limitations faced by other forms of media.