2014 was a banner year for the R&R Partners Foundation. Across our nine offices, the Foundation helped more than 20 pro bono clients, each selected based on the passion and interests of our employees.

We volunteered our time. We donated money. We even altered our own appearances, whether it was by cutting hair (Pat Carrigan shed his signature mullet for charity and raised $10,000), or growing it (Movember mustaches netted more than $1,600).

In other words, we did what we do best: Give. Help. Love. It’s what we do.

We’re making our international debut with the opening of CMV/R&R Partners in Mexico City. CEO Billy Vassiliadis made the announcement during a keynote address entitled “Translating Success – Learning to Do Business Across Cultures” at Austin’s BonusMX@ATX, a forum for creative industry executives in the United States and Mexico. It marked a long-anticipated move by our agency into Latin America, and represents our fourth new office in six years.

“The borderless economy is here and now,” Vassiliadis said. “When you look at American brands like Microsoft, Pfizer and Walmart, which are well-established in Mexico, you’re seeing how 20 years of NAFTA have helped erase many of the old trade barriers. Mexico is now the world’s 11th largest GDP and has a tech-savvy middle class that embraces the “Made in USA” label. The potential for U.S. companies to benefit can’t be overstated.”

But why now? Just like in effective advertising, timing is key. When it came down to deciding whether to invest resources into an emerging international market with CMV, a full-service agency with clients ranging from Pfizer to Birkenstock, Vassiliadis and the rest of the agency brass felt like it was the perfect time – following suit with our expansion model to seek opportunities driven by markets with growth potential, such as our offices in Los Angeles, Austin and Denver.

Additionally, the components are in place: Technology is on the rise. Positive political reforms and deregulation of energy, financial and telecommunication industries have created opportunities. The GDP growth rate in Mexico is outpacing Eurozone countries. And from an economic standpoint, Mexico and the U.S. are more parallel than perpendicular these days.

In his report, “Working Together: Economic Ties Between the United States and Mexico,” Christopher Wilson of The Mexico Institute, Woodrow Wilson International Center for Scholars explains: “Mexico and the United States are no longer competitors, where one country wins and the other loses. They are partners. The Mexican and U.S. economies are now as deeply integrated as any on Earth.”

A partnership with CMV and entry into Mexico City makes perfect sense. Sure, the stats figure into the equation – 53.6 percent of the U.S. Hispanic population lives in the Southwest, where we have the strongest presence, and nearly one in eight U.S. Hispanics lives in a city where we have an office. And we have plenty of experience conducting business in Mexico over the past decade, and more with our work with the Las Vegas Convention and Visitors Authority, Western Union, the 2012 G20 Summit and more.

There are other factors, too. The move will also yield more opportunities at home. This partnership gives us a better vehicle to create an authentic voice and vision to first- and second-generation Hispanic consumers in the U.S.

But ultimately, this bold move is about two things: the opportunities, and teaming with the right people. We’ve found that our partnership with CMV grew out of the recognition that our two agencies share a similar passion for tackling tough issues, developing creative work and having a strong internal culture of excellence. And sharing that passion across borders is something we can’t wait to accomplish together.

“Life’s most persistent and urgent questions is: What are you doing for others? – Martin Luther King, Jr. 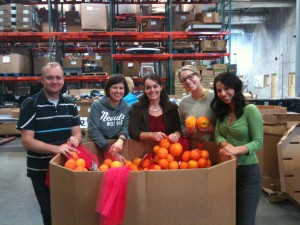 R&R Partners has again opened its hearts this holiday season! We are so proud of the kindness and generosity of our employees in every office and the charitable efforts of the R&R Partners Foundation.

R&R’s helping hands reached out from coast to coast! Our Washington, D.C., office chose two charities to assist: The Greg Gannon Canned Food Drive and Martha’s Table, both of which do incredible work for the hungry and underprivileged in our nation’s capital. For the Greg Cannon Canned Food Drive (in its 25th year), our folks in D.C. collected 85,000 cans and boxes of food. For Martha’s Table (where President and Michelle Obama served food the day before Thanksgiving), we donated a huge box of winter coats, toys and books. 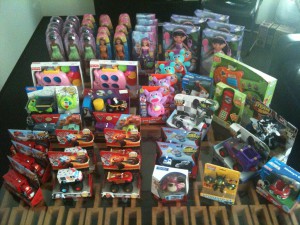 Our Los Angeles office showed its holiday spirit with a toy drive that provided more than 50 toys for the Children’s Bureau.  In Reno, our team packaged food at the Food Bank of Northern Nevada.

In Las Vegas, R&R helped 68 children of Child Focus (a program of St. Jude’s Ranch for Children) receive gifts this holiday season, and many of our employees volunteered their time to help the local food bank, Three Square, and build a house with Habitat for Humanity. We also held a food drive for Catholic Charities of Southern Nevada. 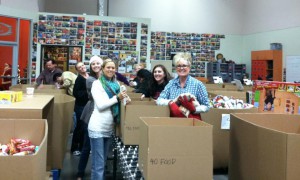 The R&R Partners Foundation has touched many lives throughout the holiday season (more on that soon). Although the year is coming to a close, R&R is committed to keeping that giving spirit all year long.  Here’s to giving in 2013!