It’s one thing to have values. It’s another to LIVE them.

Far from the apothegm “Do as we say, not what we do,” R&R Partners is a committed community partner that strives to live its values every day. As an in-demand, internationally recognized marketing communications and government affairs firm, it would be easy to toss about corporate social responsibility (CSR) as an empty business word du jour or something that we plan to eventually address. However, there’s nothing that R&R likes more than to brush past easy and set new standards for ourselves, inspiring others to do likewise.

Call it tenacity. Call it generosity. Call it a sound business strategy. We call it the good fight, and 2015 was another knockout. Here’s a look at our 2015 R&R Partners Foundation efforts.

Regarding the philanthropic pillar of our CSR endeavors, the Foundation continued to aid nonprofit organizations in all nine of our markets. Work completed on behalf of the Animal Foundation to increase pet adoptions received national recognition. Our employees, at all levels, provided in-kind donations of services roughly equal to $950,000. Coupled with direct donations of nearly $150,000, the R&R Partners Foundation is proud to have another year of million-dollar giving. 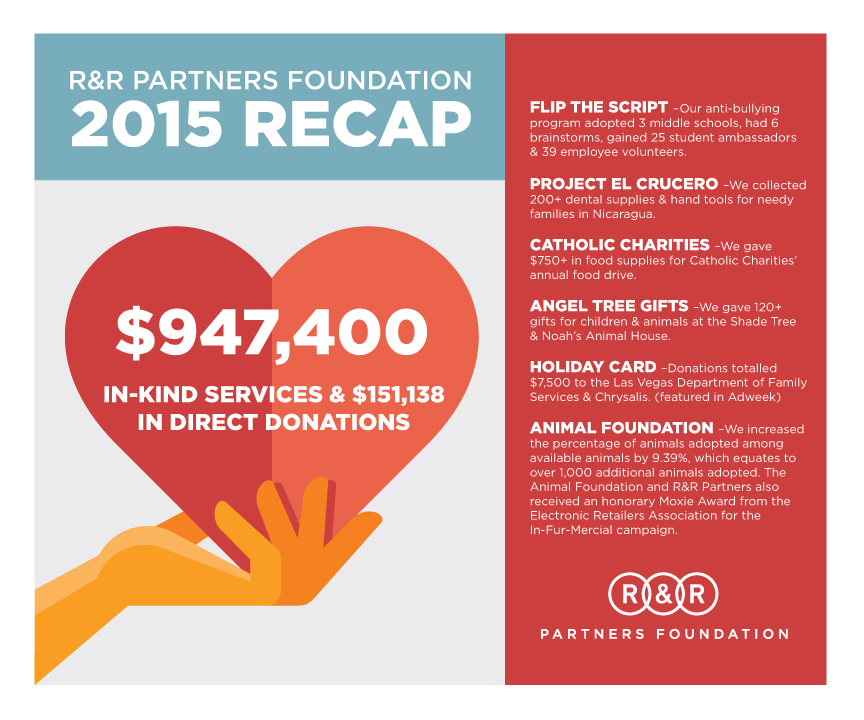 R&R’s internally driven Flip the Script Anti-Bullying Initiative also falls under the Foundation’s pro bono hours. In 2015, the Foundation completed an in-depth needs assessment process, which included primary research with more than 40 stakeholders across three states representing sectors such as business, corporate philanthropy, nonprofit, K−12, higher education and state government. While multifaceted, the issue of bullying in schools can be addressed to a significant degree by evidence-based programs.

Often, these programs face hurdles ranging from the program’s costs to adult and student buy-in. Given the enormous success in reaching students with the Flip the Script anti-bullying message in previous phases of the initiative, the Foundation knew that its greatest impact would be achieved through increasing student buy in for the evidence-based programs in their schools. We launched our current phase of Flip the Script in three Las Vegas valley middle schools, focusing on helping students drive campaigns of their own creation. In partnership with the Clark County Public Education Foundation’s Operation Respect/Welcoming Schools program and the Clark County School District’s Equity and Diversity Education, the campaigns of the middle school students at Becker, Fremont and Greenspun are well under way with launch dates set for 2016.

Working closely with Nevada Governor Brian Sandoval and his team over the course of the 2015 legislative session, R&R Partners’ government and public affairs team tirelessly advocated for a group of bills that have impacted, and will continue to dramatically impact the climate of our schools, increasing the safety of our students while protecting their opportunities for achievement.

Never afraid to try something new in order to benefit our employees, the R&R Partners Foundation moved away from the traditional executive director role in favor a new organizational structure that would allow more employees the opportunity to interact with, and make decisions for, the Foundation. This new structure includes a group of co-managers assigned to the Foundation’s three programmatic areas and an empowered employee board. While the co-managers have been active in their roles for months, the employee board recently completed its orientation and held its first meeting in December.

The R&R Partners Foundation’s board of directors also expanded by welcoming SVP for media and measurement and group managing director, Fletcher Whitwell, in the third quarter.

Board development will continue into the new year, as the board of directors will be expanding again to include more members from outside of the agency. Chairman Jim King expects to further engage the board in strategic planning activities as well.

With a roster of four new pro bono clients joining those we have supported in the past, the Foundation expects a busy year of contributing to several worthwhile organizations. Perhaps no teams will be busier than those of Flip the Script, as the aforementioned launches and campaign activations will be in full swing beginning in January. All of us are eager to see the results of the Operation Respect/Welcoming Schools evaluations for the middle schools with which we have partnered. Future phases of Flip the Script will also progress in 2016.

As in years past, the R&R Partners Foundation expects a certain amount of the unexpected in 2016. However, with a sincere commitment across our agency to our core values, and with “doing well by doing good” as our core objective, there is never a doubt that we will collectively rise to any task in order to serve our communities.