This week, Jimmy Kimmel is moving from his midnight time slot to 11:35 pm, entering the ring with the late-night heavy-hitters of Letterman and Leno. ABC is hoping that the 25 minute difference will help boost their ratings, because simply put, many people decide to go to bed around midnight. There are a lot more people still watching TV at 11:35 pm than at midnight. This shift is historic because it will be this first time that all three of the major broadcast networks will have late-night talk shows all competing at 11:35 pm. 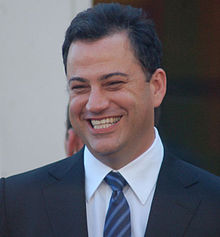 The arrival of Kimmel in the 11:35 time slot means a younger generation is starting to plant its flag there. At 44, Kimmel is younger and edgier than Leno and Letterman, both in their 60s, and brings the highly coveted 18-49 demographic. Kimmel will also have a head start on Jimmy Fallon, who has been rumored to be the heir apparent for Leno at NBC.

It’s no coincidence that the time shift comes at a time when Kimmel’s audience is steadily growing, while his rivals’ ratings are slipping. This past year, Kimmel was well-received hosting the White House Correspondents’ Dinner, and hosting the Emmy Awards.  Jimmy Kimmel Live! is also coming off its most-watched season in five years, growing 3 percent in total viewers and proving the only broadcast late night show to register an uptick this year according to ABC.

Although the Kimmel show still lags far behind Jay and Dave in the ratings, with a viewership of only 1.9 million, compared to Leno’s and Letterman’s viewership of around 3 million each, Kimmel is a legitimate threat to the current late-night landscape and should prove to be a solid move for ABC.