When I joined R&R Partners, I was thrilled to step into the glamorous world of advertising. I imagined myself a female Don Draper … working on exciting TV commercials, making creative pitches for clients, and collaborating with some of the best ad agency minds out there. And yes, the culture at R&R is part of what makes it one of the best places to work in Las Vegas. What I didn’t expect is how collaborating on our Flip the Script anti-bullying project would be one of the most fulfilling, impactful projects I’ve ever taken on in my career.

The initiative began in 2011, centered on the idea of standing up against bullying by turning it on its head and “flipping the script.” Throughout the campaign’s history, which has even resulted in Nevada Senate Bill 276 (strong anti-bullying legislation), relevant messaging and thrilling events like USA Network’s Concert to Rock Out Bullying have put this important topic at the forefront of pop culture.

This year’s mission? We partnered with the Public Education Foundation to select three Clark County School District junior high schools as our clients for the next round of the initiative. Three teams of R&R employees signed up as volunteers for this project, and I was fortunate enough to be assigned team leader for Team Purple. We were comprised of several amazing people throughout many different disciplines − design, copywriting, media, research, leadership, PR, production, insight, brand − who pulled together to create a campaign that would meet our clients’ needs.

Speaking of our clients for this project, they were atypical. Namely, they were a group of leaders in sixth, seventh or eighth grade at Greenspun Junior High School, starting at age 11. Our clients were energetic, have been fluent in social media their entire lives, and shed extensive light on what bullying meant in their world. We welcomed these clients to R&R’s offices for two separate brainstorms − one to understand their (and their parents’) experience. The second session was to present our campaign concepts to them.

Resoundingly, one of our two options stood out to these students. The concept that they unanimously voted on was Uncool. Literally. If bullies are cool − think Regina George in Mean Girls or the students of Cobra Kai dojo in The Karate Kid − then our clients wanted to be uncool. If sitting next to a lone student at the cafeteria is uncool, these incredible students were all-in. If standing up for someone was uncool, these leaders were all about it. 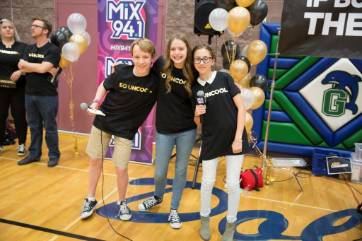 After this direction was determined, the R&R teams burst into action; our team was lucky enough to have the talents of Kristen Hart, our creative lead, manifesting our Uncool design. Through her, and other team members’ tireless efforts, our campaign concept became a reality. We had T-shirts, posters, banners and other items designed for our launch event and an ongoing student store to reinforce the campaign. Sarah Catletti, R&R brand manager who moonlights as foundation co-manager, says, “It was important to the team to make sure that after our campaign launched, Greenspun could continue to be the Uncoolest school and maintain the program. In partnering with school administration and teachers, we were able to provide branded materials for the student store that kids who were caught being uncool could purchase with Uncool bucks as currency.”