After almost a decade of drought and what experts are calling the lowest Sierra snowpack in 500 years (that’s not a typo – five centuries), the Western states are rapidly learning what we have known all along: Water is precious. It is vital to our way of life and we can’t take its presence for granted.

When R&R first began working on water conservation efforts with the Southern Nevada Water Authority more than 20 years ago, many residents here had many misconceptions on who was using water and how it could be saved. Many thought the huge hotels in the resort corridor with their fountains and water features were the biggest users. Others named golf courses. But the fact was, and still is, that the resort corridor consumes 3 to 4 percent of our water. The truth is, in a valley of more than 2 million residents, the vast majority is used by residents − everyday people living everyday lives. Further, the vast majority of that majority is used outside, keeping trees, shrubs − and mostly, lawns − alive in our arid desert climate.

So if the residents are the people using it, we knew they’d have to be the ones who save it. Over the years, our work has shown them how. This month, we’ve introduced two new campaigns to continue the momentum we’ve built up over the years.

The first is centered on the SNWA’s Water Smart Landscaping program. It’s based on a simple premise: Lawns are the biggest single consumer of water in Las Vegas. If you want to make a significant reduction in water use, replace your thirsty grass with more water-efficient desert landscaping. And the Water Authority will actually pay you money to do it through rebates. It is a program that saves 9.6 billion gallons of water a year and has, to date, upgraded more than 172 million square feet of grass to desert landscaping. 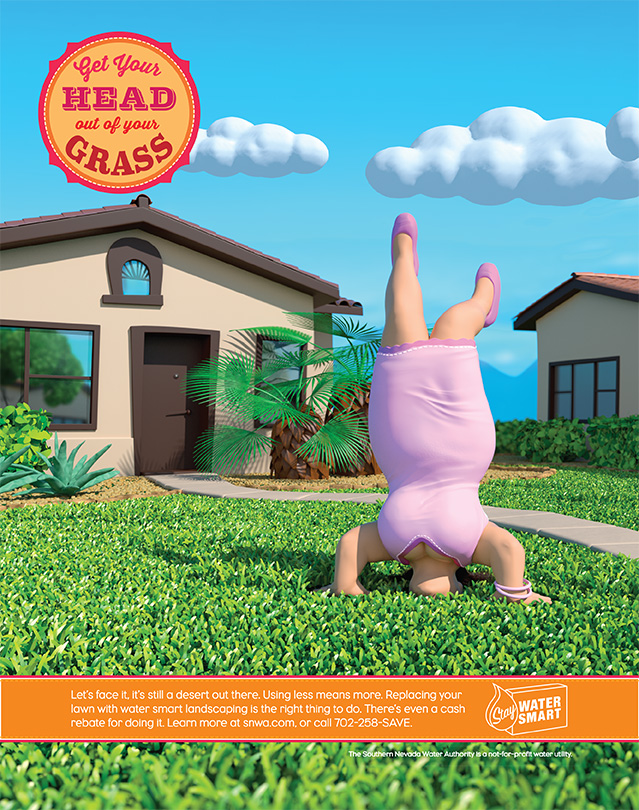 The primary message of the campaign is simple: “Get Your Head Out of Your Grass.” Short, simple, to the point. The Water Authority certainly understands that people like their lawns. And no one is suggesting that there is no place for lawns at all. Only that if we all found a way to get along with a little less grass, the water savings can be substantial. Substantial, as in 9.6 billion gallons a year. Ordinary people, doing ordinary things.

The second campaign is a continuation of an initiative the Water Authority has undertaken for many years. The situation is thus: Summer in Las Vegas is really hot. To keep our plants and lawns alive in June, July and August, we have to set the timers on our sprinklers and irrigation systems to run very frequently (almost all Southern Nevada homes and businesses control their sprinklers with automatic timers). But once the shorter daylight hours and cooler temperatures of fall arrive, our landscaping doesn’t need as much water and residents can adjust their timers accordingly. In fact, they should.

But people are busy, and they forget. This campaign reminds them. 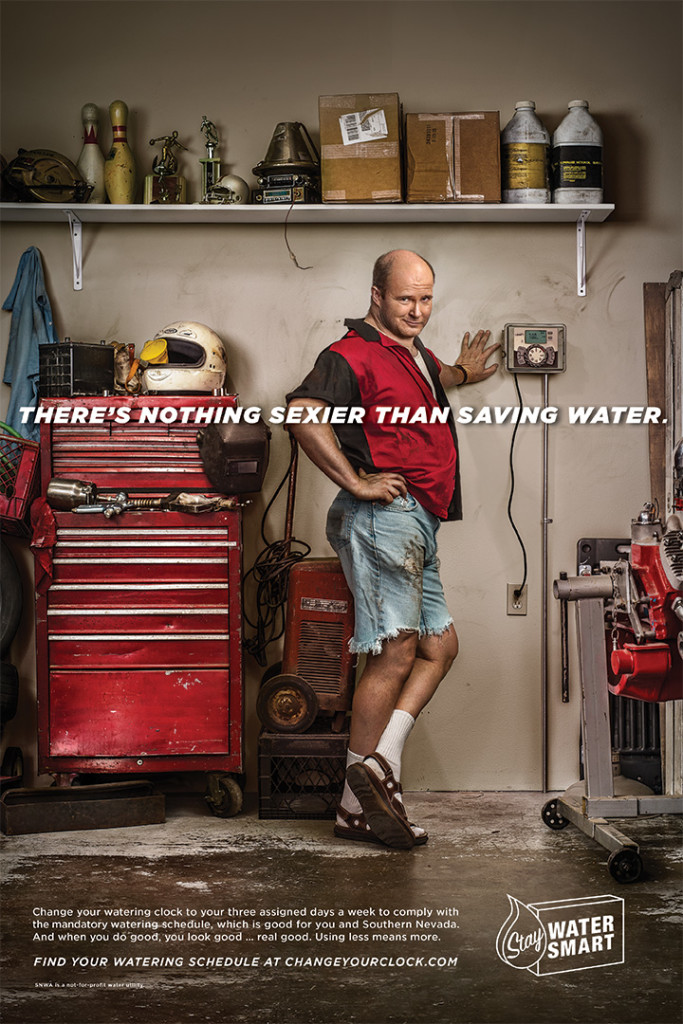 Very sexy, very easy, very effective. Billions of gallons saved every year with virtually no effect whatsoever on the lives of the home and business owners who do it. Ordinary people, doing ordinary things. Saving water, one gallon at a time.

That’s how, living in the middle of the Mojave Desert during the worst drought any of us has ever known, the citizens of Southern Nevada are saving more than 42.5 million gallons of water a day. It’s how we have reduced our consumption of water from 248 gallons per capita per day (GPCD) in 2008 to 118 GPCD in 2014. It’s how we’re saving water at a rate five times greater than the rate of our population growth.

That’s how we’re saving water here in the desert. And that’s how the other Western states can too − ordinary people doing ordinary things.